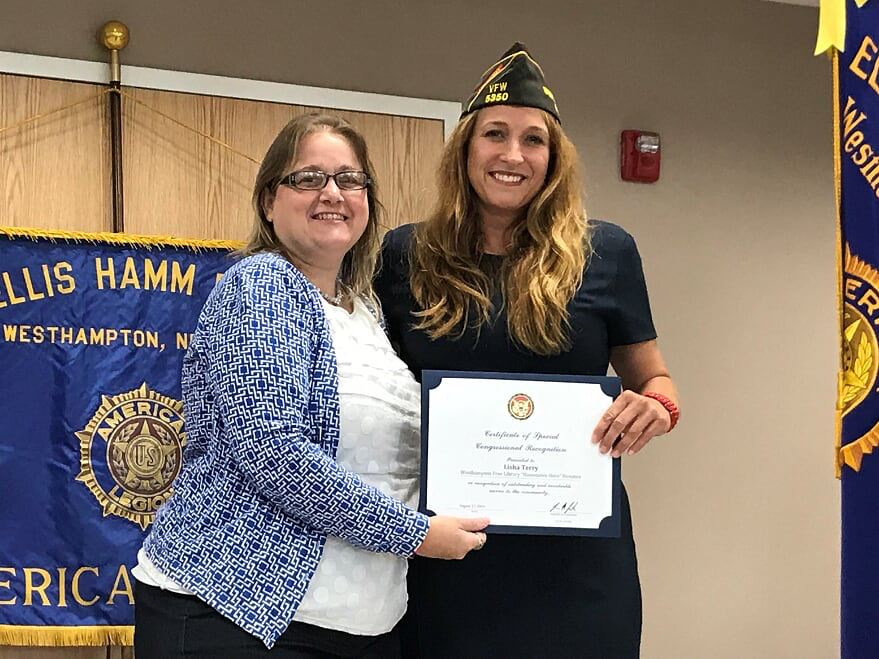 Lisha Terry, a 1995 graduate of Westhampton Beach High School, joined the Coast Guard Department of Transportation in 1996. Within two years, she advanced to the rank of seaman first class, became a crewmember at the Shinnecock Station, volunteered for the Westhampton Beach Ambulance Company, and received a letter of commendation for her rescue of two plane crash victims, having swum to the plane in rough waters. She became a dental technician in 1999.

In 2002, Terry’s active duty ended and she returned to the Coast Guard Reserves at Shinnecock Station. She continued her work as a dental assistant at the Air National Guard Medical Clinic, where she completed Airman Leadership School, served in the 106th Honor Guard, was promoted to non-commissioned officer staff sergeant and then to technical sergeant, and took part in medical training in Spangdahlem, Germany.

Terry switched from a medical route to security forces for a chance at deployment because she did not want to retire before serving her country overseas. In 2015, she was deployed to the 386th Air Expeditionary Wing in Ali Al Salem, Kuwait. She was awarded the Global War on Terrorism Medal for her service and later earned an associate’s degree in criminal justice through the U.S. Air Force. She continues to train with the 106th and recently attended the 7-Level School at the Lackland Air Force Base in Texas.

As a civilian, Terry volunteers with VFW Post 5350, Westhampton American Legion Post 84, the Westhampton St. Patrick’s Day Parade Committee and the nonprofit HUGS. She also is a licensed massage therapist with an urban farming business, a beekeeper, a mermaid and an environmentalist. She has two children, Reed, 12 and Race, 10.