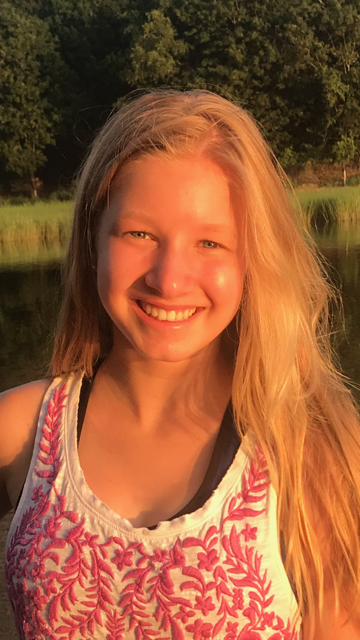 Riley was excited to take out her map and start exploring the beautiful parks we have here in Suffolk County.  She was very methodical with highlighting the parks she was familiar with and then others that were not too far and had interesting things to offer.  Her parents grew up on Long Island and loved their visits to Lake Ronkonkoma and Smith Point Parks.  She saw that these parks were great for families to visit and had great nature trails.  Riley hopes to camp out at Shinnecock next summer with her family.  Exploring the parks made her aware of all the beautiful parks in Suffolk.

Riley enjoyed volunteering in her community by specifically serving Veterans and children.  She is an American Legion Auxiliary Junior Member and participated in such activities as Stony Brook Home volunteer, delivering books and clothing to Veterans homes, cutting coupons each month to send overseas to military bases and even attended funeral services for Veterans at Calverton Memorial to name a few.  These actions have allowed others in her community to count on her – especially the older veterans and children. She enjoyed getting to know their families as well. What a special way to give back. She feels that this has inspired her to become a Teacher. She also received the Presidential Volunteer Service Award.

Riley worked on strengthening and speed drills to improve her soccer skills.  She would do countless activities such as push-ups, core workout and running long and short distances.  She is a member of the Varsity Soccer Team. She enjoys biking, running, agility and strength training.  She says her skill level has increased tremendously.

Riley’s personal development goal was to write a children’s book that would resonate with young readers.  She devoted hours each week to research writing styles on the internet and draft, then rewrite until she was happy with the outcome.  She completed her book called “How Tom Talks” in January and entered a writing contest through the Emma Clark Public Library in Setauket and won 2nd place!